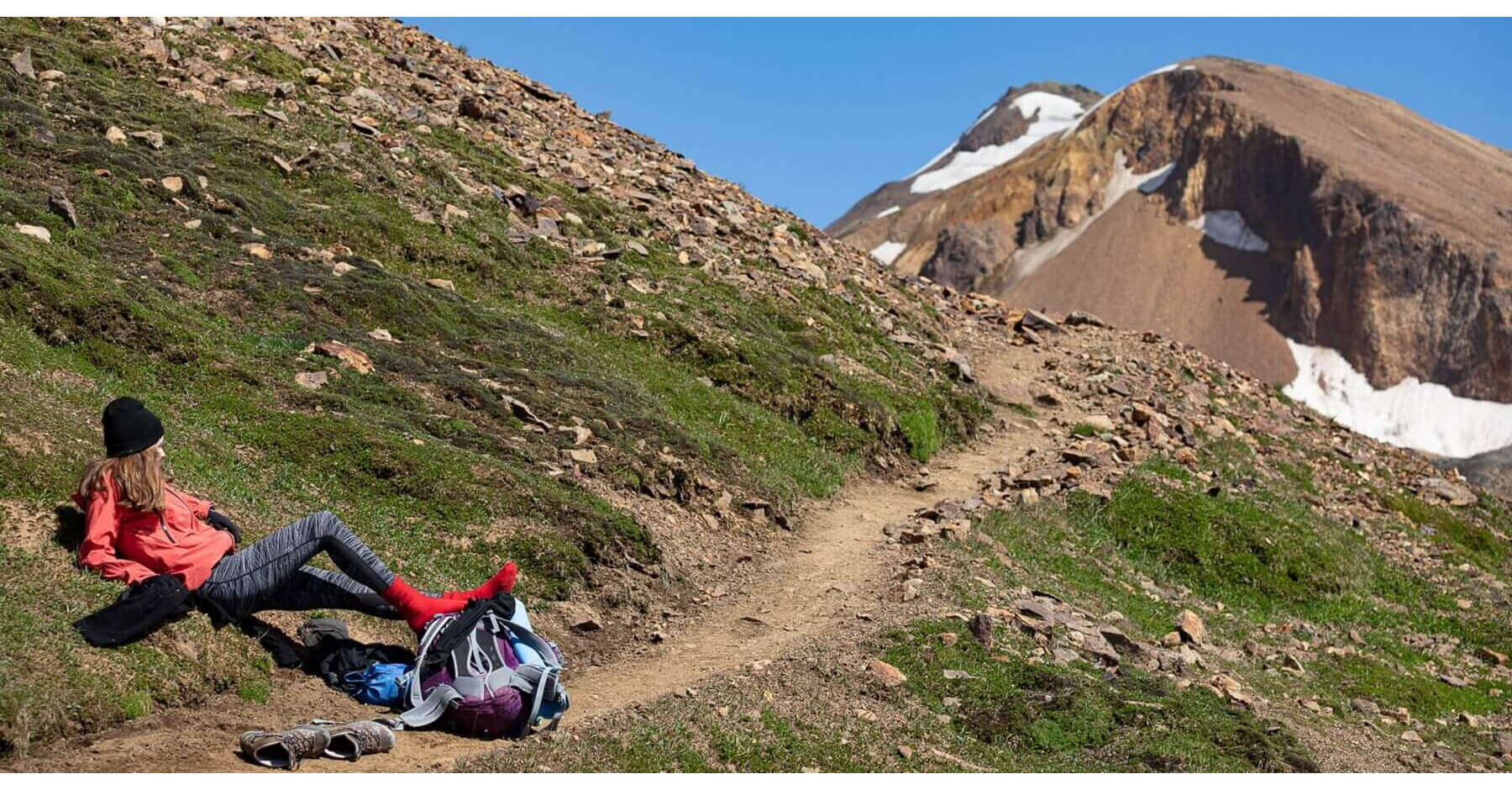 In a country obsessed with hiking, the Laugavegur Trail holds almost mythic status – completing it is an obligation for any self-respecting Icelandic nature-lover. And it’s not just Icelanders who have fallen under the spell of the Trail’s lava fields, snowy highlands and glacial views. The route attracts thousands of tourists each summer and has even featured in the National Geographic’s global top ten list of hikes.

I was determined not to return home to the UK without completing this Icelandic rite of passage. And so, on an unusually sunny July morning I set off from Landmannlaugar, feeling like a packhorse with my tent, sleeping bag and copious amounts of kleina (Icelandic doughnuts) all improbably strapped to a tiny backpack. And of course, I mustn’t forget, the hiker’s true best friend: multiple pairs of thick socks. For this adventure I selected the Cambridge Sock Company’s Holkham in Old Gold, the Wainwright in Brigade Red and The Murray in Clematis, in the hope that the vibrant shades would inject a little personality into an otherwise dull hiking outfit.

Land of Steam And Snow

The most striking thing about the Laugavegur Trail is its extreme contrasts. Though it spans just 55km, hikers encounter icy highlands, desolate lava-fields, towering glaciers and vibrant young woodlands all within the space of a couple of days. The first day of the trip is a case in point - starting amongst the multi-coloured sandy mountains of the Fjallabak Nature Reserve and ending in Hrafntinnusker, an insanely gothic campsite setting, complete with copious amounts of black obsidian, sulphurous steam and circling ravens. There can be few other places in the world where you can brew a cup of tea using water boiled via a geothermal pool and have a snowball fight in exactly the same spot. There’s truth in the ‘land of fire and ice’ cliché that is frequently used about Iceland.

The socks and I are put to the test from the very first night. Camping in a tiny 90s festival tent on an exposed lava field 1100m above sea-level is a chilly experience even in July. I spend the night cocooned in a coat, a jumper, a hat, multiple layers of thermals and all three pairs of socks. Despite the cold, there can be few better ways to enjoy the wonders of Iceland’s midnight sun than sitting in the middle of the Highlands, bundled up in a sleeping bag with a mug of whiskey and a packet of biscuits.  At around 2 am the clouds glow pink and a purple dusk settles briefly, but throughout the night light streams into the tent and I can gaze out of a hatch at the kilometres of snow stretching towards Álftavatn as I wait for morning. 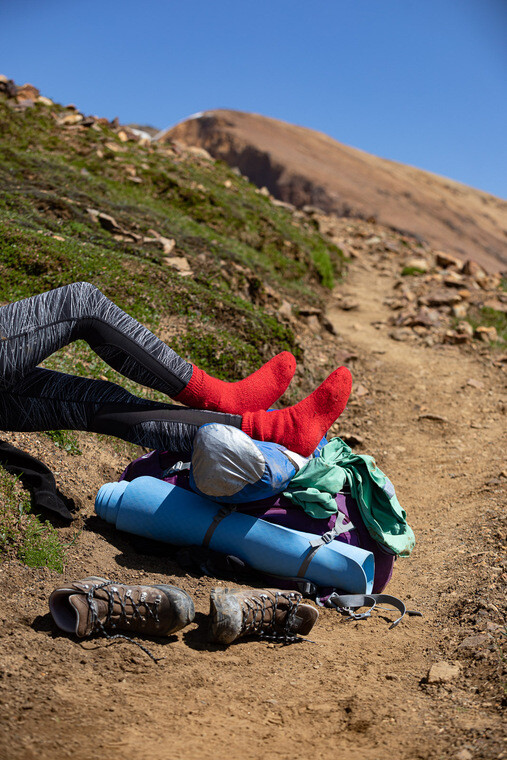 Not for the faint hearted or should that be faint-feeted …

Laugavegur’s biggest challenges by far are its numerous glacier rivers. Throughout the second and third days of the journey, we walk in the shadow of Eyjafjallajökull and Mýrdalsjökull. The melt waters from these two enormous glaciers form huge grey rivers that are impossibly unpredictable – depending on weather conditions they can go from a tiny stream to an impassable hip-level torrent in a matter of hours. I’m lucky on my trip, only encountering three rivers, the largest of which reaches just above my knees, but that doesn’t make the experience any more pleasurable. Nothing can prepare you for your first bare-legged step into a glacier river. The pain is indescribable. But the wave of relief that comes once you’ve reached the other side, rolled down your trousers and pulled on a fresh pair of warm Cambridge Mohair Socks almost makes it worth it.

Experienced Icelandic hikers will tell you Laugavegur is relatively easy (some ultra-marathon runners are even insane enough to complete the trail in just 5 hours). But I beg to disagree. Even without glacier rivers to contend with, Laugavegur throws everything the Icelandic countryside has to offer at you: sheer rocky slopes, clouds of black dust, kilometre after kilometre of snow. By the final day my patience is wearing thin, I’ve run out of coffee and chocolate. To make matters worse, the final day consists of a trek across a huge desolate expanse of dark grey sand, a monotonous wasteland that tests my willpower almost as much as my physical fitness. When we eventually reach the paradise-like Thorsmork valley after four days of walking, I can barely believe I’ve made it.

I’m struck with even greater disbelief when I realise that after 55 kilometres of hiking in borrowed boots, I’ve emerged without a single blister.  My face is comically sunburnt, and I never want to pick up another backpack, but my feet are remarkably intact – in fact I almost feel as though I could do it all again! Perhaps I’m some kind of hiking superhero? Or more likely, I’ve got some superbly cushioned socks.